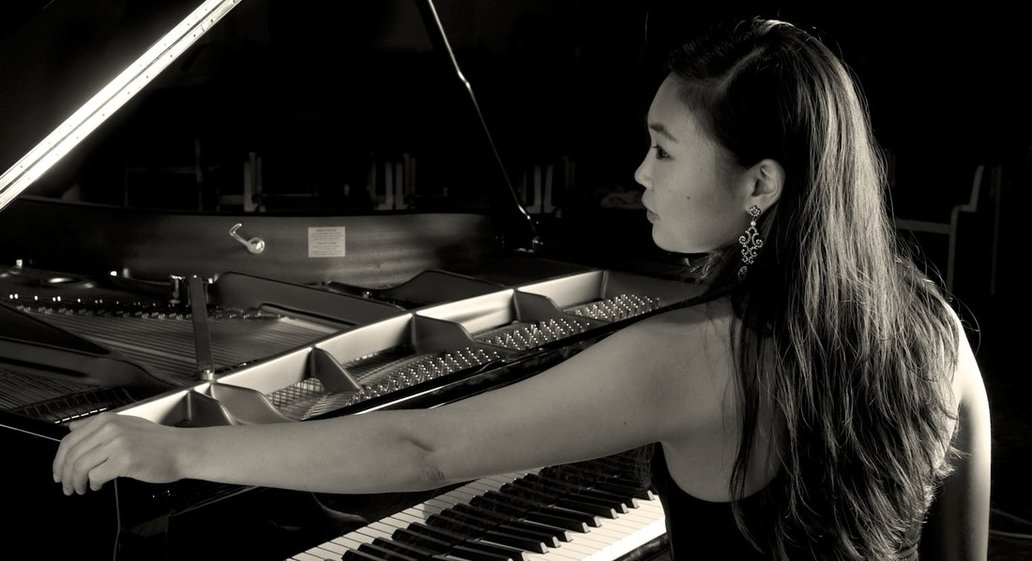 ​Korean-American pianist IRENE KIM, a critically acclaimed prize-winner of international competitions, has performed across the globe in Europe, Asia, North America, and Australasia appearing in venues such as the Walt Disney Concert Hall, the Kennedy Center, Dorothy Chandler Pavilion, Centro Cultural del Antiguo Instituto, and the Library of Congress.

She is known for her powerful and authoritative performances, which include the rare feat of performing Prokofiev's Third Piano Concerto without a conductor. She has appeared as soloist and chamber musician in festivals such as LA Phil's Noon to Midnight, Banff Centre for the Arts Festival, Gijón International Piano Festival, Piano Festival Northwest, American Liszt Society Conferences, and Coachella Valley Music and Arts Festival.

As a musician of curiosity, Irene has collaborated extensively, most notably with vocalists, cellists, violinists, and percussionists. She tours internationally on both piano and harpsichord with violinist Benjamin Hoffman as co-founders of Brightfeather. Continuously piqued by the music and art of her contemporary surroundings, she works frequently with living composers and collaborates with visual artists and dancers. Her additional training as a conductor and piano technician informs her performance practice and instruction. She also completed an internship with the Domingo-Cafritz Young Artist Program at the Washington National Opera and the Kennedy Center for the Performing Arts.

Recognizing the importance and responsibility to nurture and serve future generations and community in the arts, she has devoted over twenty years to instructing students from all around the world. She has been a guest artist and teacher at Sunway University in Malaysia, the Peabody Preparatory in Maryland, Interlochen Arts Academy in Michigan, and the Conservatorio Statale di Musicale Cosenza in Italy. She is a Steinway and Sons Education Partner.

Born and raised in Los Angeles, she began musical studies at age three with her soprano mother. By age five, she was accepted into the distinguished and influential studio of Dr. Ick-Choo and Hae-Young Moon, where her formative training was established. At age eight, she made her orchestral debut with the Young Musicians Foundation Orchestra.

Irene’s professional training was centered at the Peabody Conservatory, where she received her Doctorate in Musical Arts. She was awarded the Albert and Rosa Silverman Memorial Scholarship, the Lillian Gutman Memorial Piano Prize, and the Clara Ascherfeld Award by the Conservatory for her musical endeavors during her studies there with Boris Slutsky, Benjamin Pasternack, and Marian Hahn. In the course of her musical erudition, she also had the honor to work with various distinguished musicians, including Leon Fleisher, Anton Kuerti, Robert McDonald, Ani Kavafian, Alexander Toradze, Robert Van Sice, and Ransom Wilson amongst others.